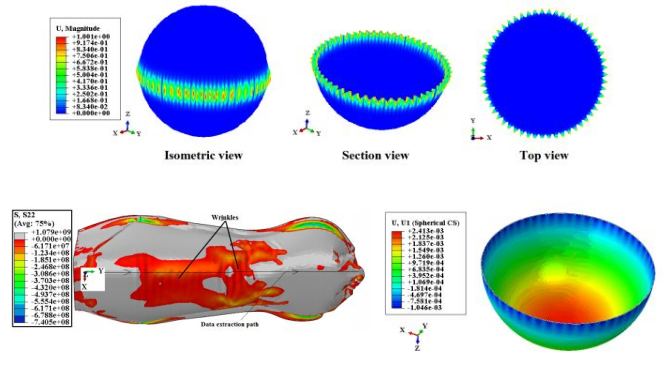 Wrinkles are wave like patterns formed over thin-walled structures whenever compressive stresses are induced. It is a non-linear phenomenon. We present stress analysis and study of wrinkles in axis-symmetric stretched thin spherical shell and an internally pressurised inflated thin-walled structure which look like fruit juice pouch available in market.

We performed buckling (eigenvalue) and post-buckle for spherical shell and dynamic explicit analysis for inflatable structure in ABAQUS package with linear elastic isotropic material and consideration of geometric non-linearity.

For thin spherical shell, equal and opposite unidirectional tension is applied on two halves. Under this load, one of the principle stress in spherical coordinate becomes negative in equator region. Due to induced compressive stress, wrinkles are observed in equator region in direction perpendicular to loading. Eigen value analysis for different radius and thickness suggest that the critical buckling load depends on ratio of radius and thickness. For different modes, buckling load is proportional to square of wavenumber. So, at lowest buckling load wavenumber is more than one.  As the load is increased beyond buckling has occurred, the wavenumber starts decreasing. But the wavelength of wrinkles (distance between two peaks) decreases at first and then increases.

Formation of wrinkles is an instability problem and under certain boundary and loading condition it occurs in elastic region of stress-strain curve. This causes failure of thin-walled structures under elastic limit hence study of wrinkles is important. Also, it finds application in determination of elastic properties of micro-structures and membrane.